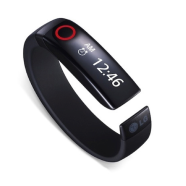 Posted by Rafa Collis on January 13, 2014 in Trending | Leave a comment

Over the past few weeks, everyone has been talking about fitness trackers–and it seems that they are going to give us more to talk about in the coming months. I, too, recently got a Fitbit Flex as a gift, and it’s been about two weeks since I started using it. My initial impression is that it does its job really well, and at the end of the day you can see how you did that day in terms of steps, calories burned, and distance traveled.

Although you almost forget that you’re wearing something around your wrist, we here at Gizko think it would be awesome if you could do much more than tracking your exercise. Think about it: if you’re going to invest in a wristband device, the more functionalities the better, right?

It seems that many companies in the 2014 CES thought the same way. Like many of you, I think that the rising demand for wearable bands is going to skyrocket in the coming years. But with so many upcoming choices, how can one keep track of them all? Let’s do a quick roundup of the most exciting wearable gadgets that were showcased at CES 2014. 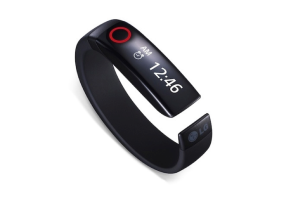 LG’s approach to wearable technology: integrate a band into your life to such an extent that you will wonder how you ever lived without it. The Lifeband has an OLED touch display that reports your steps/calories (such as other regular sport bands) but it also notifies you of incoming calls and texts, silences calls and chooses your music. The LG Lifeband is an extension of your smartphone, so you’ll never feel disconnected. The design looks pretty nice and sleek, too, though it might feel a bit bulky at times, especially if you are used to thinner fitness bands like the Fitbit Flex or Force. The price is not out yet, but it is expected to come out in the first half of this year. 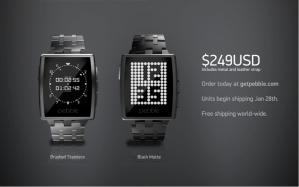 Pebble just upgraded their now famous smartwatch. Although functionalities are exactly the same as the regular Pebble (fitness, calls, texts, music…), it does look much sharper and less plasticky. I think that was also a major concern for the regular Pebble; nice device, but I wouldn’t wear it with a suit. After this long-awaited upgrade, I’m sure more people will soon be sporting the Pebble Steel on their fancy wrists. 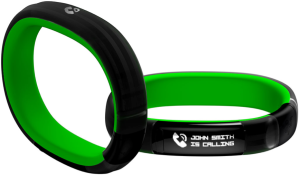 For gamers, Razer was and still is one of the finest gaming accessories companies. Lately they have been extending to other areas, such as gaming tablets, with their Razer Edge. And now they’ve surprised us again with the Nabu.

The Nabu is a wearable band very much along the lines of the Lifeband (fitness plus receiving calls, messages etc.). So what’s different about it? Well, it has two screens: a small one on the front for notifications, and another in the back to read texts or to see who is calling. After all, if the competition thinks one is good enough, why not make it two? According to Razer, other capabilities will soon be available, such as transferring contacts via a handshake or communicating with others on the same platform.

Price is still unknown but it’s rumored to range from $99 to $149, and the release will be some time around the first quarter of this year.

Keep on reading! More smartbands and insights in Part 2.